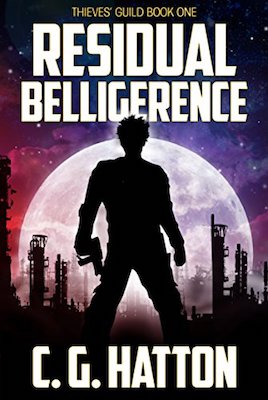 The almost mythical Thieves’ Guild has no qualms about playing both sides of the line, manipulating and exploiting the ever-present rumblings of discontent between Earth and Winter. No one messes with the Thieves’ Guild. Except someone just did.

Zach Hilyer is in trouble. Taking a package from A to B always gets more complicated when A doesn’t want to lose it and C will pay and do anything to get their hands on it. Hil is good, one of the best field operatives in the guild. Problem is, he can’t remember when it all went wrong.

After crash landing on a planet with no memory of his last assignment, Hil discovers that his handler is dead and someone’s put a price on his head.
Injured and alone, he has no choice but to go rogue from the guild, fight to clear his name and wreak revenge on the people who set him up.

Blackmail, murder, betrayal and the highest bounty in history set the Thieves’ Guild at the centre of a conflict that threatens to spark a galaxy-wide war.