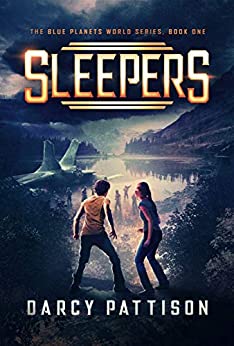 A rogue militia. A diabolical sabotage. Is an alien teen is the only hope for either blue planet?

Sleepers is the first book of an exciting science fiction trilogy that forces a dying world to beg for refuge on Earth. A test-tube baby, fifteen-year-old Jake Rose is half human and half alien. After living with his mother on Rison for most of his life, he finally comes to Earth to live with his human father’s grandparents on Bainbridge Island in Puget Sound. His mother, Dayexi Quad-de is Rison’s ambassador to Earth. She’s tasked with finding Risonians a new home on Earth in a peaceful manner. Jake accidentally discovers that Earth’s elite ELLIS forces are tying to sabotage Mt. Rainier and make it explode so that they can blame it on the Risonian aliens. Can Jake stop them in time or will they ruin the Risonians chances at a refuge on Earth?